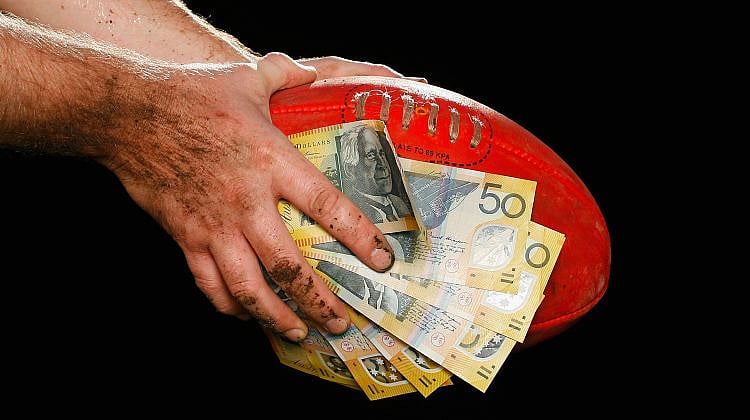 Australia’s economy will soon get an injection of several hundred million dollars, with another AFL season about to get underway.

“The AFL generates a lot of money,” says RMIT senior lecturer Mark Stewart, an expert on the economics of sport. “It’s a big, big part of the entertainment industry.”

The show opens on March 21 – although the pre-season curtain-raiser, known as the JLT Series, starts on February 28.

The AFL posted revenues of $650.6 million in 2017, according to its most recent annual report. That was a 25.8 per cent increase on the year before.

However, while the AFL has a positive impact on Australia’s economy, Dr Stewart says it’s not as large as the headline numbers suggest.

“A big whack of that [impact] comes from the government through subsidisation of stadiums,” he says.

“That’s money that’s come from somewhere else that’s either being collected by taxes or not spent on some other government pursuit, whatever it might be – a school or a hospital or a road.”

There’s plenty of money to go around

On the plus side, the AFL provides employment for thousands of players, coaches, officials, administrators, marketing professionals, media professionals and catering staff, which then trickles down to the rest of the economy.

It also helps deliver a return on investment for publicly funded stadiums that might otherwise go unused.

But as Dr Stewart points out, a lot of these jobs are low-skilled (catering, ticketing, customer service) and seasonal (March to September).

Also, there’s an opportunity cost – the money that governments and consumers lavish on the AFL could potentially deliver a better return if it was spent elsewhere.

The vast majority of this season’s games will be played in the cities where the 18 clubs are based – Sydney, Melbourne, Brisbane, Perth, Adelaide, Gold Coast and Geelong. The clubs are also taking some games to Hobart, Canberra, Darwin, Townsville, Ballarat, Launceston and Alice Springs.

So while Australia’s biggest markets will enjoy most of the economic benefits from the coming season, some smaller communities will also cash in.

Dr Stewart says these secondary markets benefit in two ways. They get an immediate economic boost, from weekend visitors spending money on pubs, restaurants and hotels. They can also get longer-term benefits, if the free media coverage motivates Australians to travel to those places in the future or even relocate permanently.

The AFL knows how to work the system

If a footy season generates all this economic activity, does that mean Australia’s economy would receive an even bigger boost if the AFL had more teams and played more games in more communities?

Not necessarily, according to Dr Stewart.

“It depends on whether the benefits are greater than the costs. You could put a game on in some place and if nobody goes to watch it, you’ve got all the costs associated with putting it on but it doesn’t necessarily benefit the net situation,” he says.

Dr Stewart says that explains why the AFLW has just seven regular season games, compared to 22 for the AFL. The women’s league runs at a loss, so adding games would mean more red ink rather than less.

The AFL is a big business, and one that keeps a close eye on its bottom line. The AFL posted a net profit of $48.8 million in its latest annual result – reflecting not just its impact on the economy, but also its ability to work the system.

“Never get between a local politician and a photo op with a sports star.”