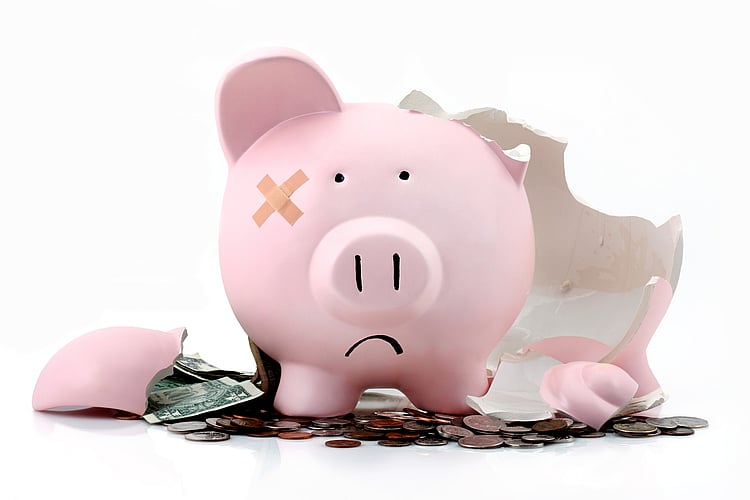 According to ME’s latest Household Financial Comfort Report more and more Aussies are feeling the pinch and are either being forced to bust open their piggy banks or resort to credit cards and loans just to make ends meet.

The HFCR measured people’s levels of financial comfort from 1-10 (1 being the least financially comfortable, 10 being completely financially comfortable) of 1,500 households in regard to the Household Financial Comfort Index. The index is made up of components like comfort with ‘savings’, ‘dealing with a financial emergency’, ‘investments’ and ‘level of debt’.

According to Consulting Economist for ME, Jeff Oughton, the ‘comfort with savings’ saw the biggest overall dip, slipping to 4.93/10, a decline of 3 per cent. Oughton said this meant that “some households may get to a point where there’s no more savings to draw from. Currently, around a quarter of Australian households have less than $1000 in cash savings.”

Australians suffering the most from financial stress

Oughton proclaimed that “Students are always among those with the lowest financial comfort in each HFCR due to a lack of comfort with cash savings, investments, net wealth and their reduced ability to manage a financial emergency.”

This millennial category scored particularly low in “comfort with savings” and “comfort with a financial emergency”, according to the report.

Oughton proclaimed that while people may consider this age group more financially secure, in fact “many are still concerned about current finances as well as worried about their life after work, expressing an 8 per cent drop in comfort with their expected standard of living for retirement, as well as a -7 per cent fall in their ‘comfort with savings’. Recent changes to superannuation in the past year appear to be significantly impacting this life stage.”

Oughton said: “South Australia’s rise in household financial comfort appears to be linked to the sustained and significant fall in unemployment, with households feeling more positive about their jobs, incomes and their financial position generally.”

Oughton said: “With about 15 per cent of the workforce self-employed, it’s clear a number of entrepreneurial Australians are opting to be their own boss, taking control of their own finances and are feeling the positive benefits in their household finances as a result.”

They found that despite the rising cost of living expenses, nearly half of households (42 per cent) had not seen any change reflected in their incomes over the last year. 24 per cent actually reported having cuts made to their incomes, whereas only 34 per cent saw a raise. This resulted in a decline in ‘comfort with income’ by 2 per cent nationwide.

Housing stress is still a common problem among Australian households, with a common indicator of financial stress being that a reported 45 per cent of households contributed more than 30 per cent of their disposable income towards mortgages during the past 6 months.

There was a rise in the number of households with debt that expect that they ‘will not be able to meet their required minimum payments’ and ‘can just manage to make minimum payments on their debt’ in the next 6 –12 months. This is a total of 43 per cent, compared to 38 per cent in December 2017.

“The good news for renters is that financial stress has lessened somewhat during the past six months, thanks to the housing market cooling and rents falling. While almost three-quarters (72 per cent) of renters were previously contributing over 30 per cent of their disposable income towards rent, this number dropped significantly to two-thirds (67 per cent) in the most recent survey.”