Aussies flushing thousands of dollars down the toilet 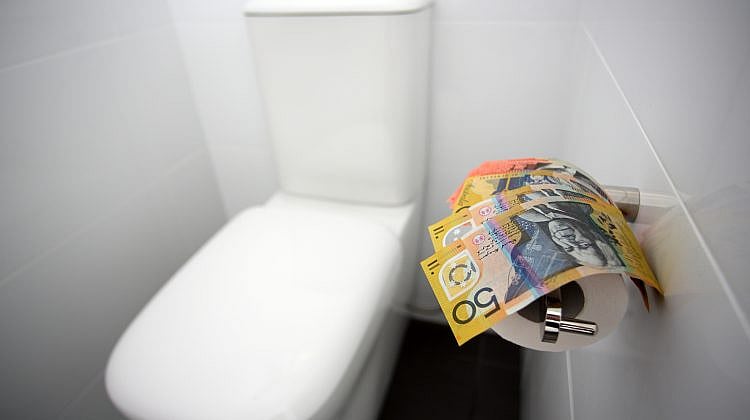 Ever fancied the idea of flushing money down the toilet? It sounds ridiculous, yet many Australians do something similar.

If you take out a mortgage and you automatically give your business to one of the big four banks, there’s a fair chance you could be part of the toilet-flushing crowd.

Imagine you were an owner-occupier paying principal and interest who wanted to take out a variable-rate loan of $360,000 to buy a $450,000 property (which would equate to a 20 per cent deposit). Here is what is currently on offer from the big four:

Yet as this mortgage comparison table shows, there are a range of lenders that offer lower-rate products. Examples include:

It’s important to point out that the cheapest loan isn’t always the best. Also, everyone’s financial circumstances are unique, so for some borrowers the big four will be the best option. But given the amount of money on offer, it makes sense to at least consider using a challenger lender.

If there are a range of lenders undercutting the big four, why do three out of four mortgage borrowers continue to use the big four banks?

One reason is a feeling among some Australians that small banks, credit unions and non-bank lenders are risky. However, don’t forget that when it comes to any sort of loan, the party that takes the risk is the lender not the borrower. Also, smaller lenders have to follow the same set of regulations as the big banks.

Another reason people shy away from smaller lenders is a belief that the big banks provide better customer service. However, in the monthly Consumer Banking Satisfaction survey conducted by Roy Morgan Research, smaller lenders regularly outperform the big four. Indeed, in the most recent survey (August), all four of the big banks scored below-average satisfaction ratings.

A third reason borrowers can be wary of smaller lenders is because they may not have any nearby branches – or, indeed, any branches at all. If branch access is non-negotiable, do your research before ruling out a particular lender, because you might be surprised to discover just how many branches some smaller lenders have. It’s also worth mentioning that almost everything that used to be done in branches can now be done online or over the phone.

The cheapest home loans on the market

The lowest rates from the biggest banks

These 5 home loan traps could cost you massive dollars

How do you qualify for a CBA home loan with casual employment?

Qualifying for a home loan without a full-time job may be challenging, but it can be done. The first step is to understand how a CBA home loan is assessed when you have casual employment.

Most lenders will assess your expenses and savings while checking your loan eligibility, checking on factors crucial to home loan approval, such as if your bills are paid on time and what your credit score presently looks like.

Your income can be one of the most critical factors to determine your final approved home loan amount. As such, you’ll need to provide payslip copies to lenders to assist them in assessing your income during the loan tenure, regardless of your employment status, full-time, part-time, or otherwise.

Casual employees will want to be casually employed for at least 12 months to be eligible for a home loan. Alternatively, you want to have worked as a permanent casual worker (working for a fixed number of hours per week) for at least one month, or you should have been in your current job for a minimum of three months (if the hours are irregular) to be eligible for the loan.

How to choose a home loan