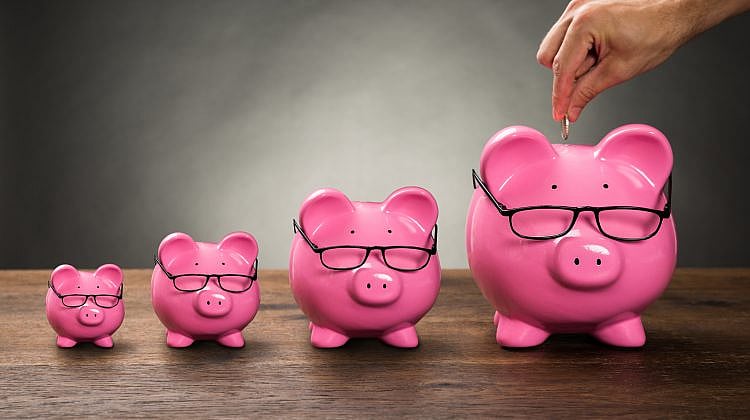 The study recorded data from one-, three-, six-, 12- and 36-month term deposit accounts across more than 100 financial institutions in RateCity’s database based on a $50,000 deposit. It found sharper falls to longer-term term deposits such as the average three-year rate fell 18 basis points since June to 6.26 percent, while shorter terms have increased including the average three-month term jumped up by 11 basis points to 4.90 percent. This is compared to the Reserve Bank’s official cash rate remaining at 4.50 percent since May.

Major four rates lower
RateCity also discovered that the big four banks (Commonwealth Bank, ANZ, Westpac and NAB) have reduced many of their rates for term deposits. According to the benchmark rates (the average of the major four), three-year term deposit rates decreased from 6.5 percent in July to 6.17 percent in October. The rates for three- and six-month term deposits also fell while 12-month rates were unchanged.

Long-term rates lower but still better
While some of the longer term rates have decreased, many are still more attractive than shorter-term offers. But the catch is that you have to lock your money away for longer or face a penalty fee.

Get more than average
If you are an investor wishing to invest your hard-earned cash, there is a way that you can earn more than the current average rates. For instance, one of the best six-month term deposits for a $5000 deposit listed on RateCity is 6.21 percent by RaboDirect. This is 74 basis points higher than the average rate of 5.47 percent. Just by depositing $5000 into this account you could earn yourself $155 at maturity. Compare term deposits and show your financial institution that you won’t take their “average” rate by switching to a better deal.

Term deposits which term is most lucrative now?

Long term investors, get more for your bang

How long is a term deposit?

A term deposit refers to when you lock your money in an account for a certain period of time and at a specified interest rate. You will not be able to access your money for the length of the agreed term without incurring a penalty fee.

A long term deposit generally refers to a term deposit that lasts for more than 12 months – which in some cases may be as long as 10 years.

Usually, the longer you store your money, the better the interest rate you’ll get, so a long term deposit will tend to pay higher interest than a short term deposit.

At the end of the term, you can roll over the money (plus the interest you’ve made during the term), or you can withdraw it all.

What is a term deposit rate?

The term deposit rate is the agreed interest rate for your term deposit. It remains fixed for the term of the deposit.

Term deposits are a popular type of investment because they’re safe and provide reliable returns.

The return you get on your term deposit will be determined by the amount you initially invest, the amount of time you choose to invest it for, and the term deposit rate.

What is a fixed term deposit?

A fixed term deposit is a safe and stable way to earn a fixed return on your cash investment.

Fixed term deposits are essentially bank accounts where you lock your money away for a fixed period and earn a fixed interest rate on those funds.

Fixed term deposits can be both short term, which is usually anything under 12 months, or long term, which can be up to 10 years.

Once the fixed term has ended, the bank or financial institution will give you back your initial deposit plus any interest you earn during the fixed term period.

Depending on the type of fixed term deposit account you open, when the term matures, you may have the option of rolling the funds over for a new term or withdrawing the funds.

Unlike other savings or transaction accounts which offer variable interest rates and flexible features, fixed term deposits offer fixed interest rates, which means the amount of interest you earn will remain the same during the term of the deposit.

What is a term deposit?

You can open a term deposit account for one month or up to five years depending on your investment goal, and invest as little as $500 to start earning a profit.

With a term deposit, you get to decide how much you want to invest (the principal or deposit), for how long (the term or duration) and the frequency of interest payments.

A term deposit represents a secure form of investment, unlike trading in shares or purchasing real estate. And a term deposit up to $250,000 is protected by the government guarantee.

How safe is a term deposit?

Term deposits offer a fixed interest rate which is guaranteed, so you do not have to worry about rising or falling interest rates when investing. You can add up how much interest you will earn over your fixed term, and this will be paid into your account per the conditions of your term deposit.

Term deposits with authorised deposit-taking institutions are also guaranteed for up to $250,000 by the Financial Claims Scheme, so you don’t have to worry about the bank collapsing either.

The only inherent risk of a term deposit is if you may need to break it early. If this happens, you will need to pay a breakage fee and possibly sacrifice some of your interest as a penalty. But if you know you can invest a certain amount of money for a fixed period of time, you can rest assured that a term deposit is a safe investment option.

Are term deposits worth it?

Ultimately, whether term deposits will work for you will depend on your particular financial needs.

Term deposits can be a great way to get your money working for you. By locking it away and forgetting about it for a period of time, it can earn interest for you. If you have the interest paid on a regular basis, rather than at maturity, you can either have some extra spending money or you can reinvest it into the term deposit to compound.

Of course, locking your money in a term deposit means you cannot access it for the length of the term, without paying a penalty for early withdrawal. This can remove the temptation to spend the money, while it also earns interest.

If you are a student who has managed to save some money and are looking for a safe investment option, you may be considering a term deposit. Most term deposits (and other bank accounts) are open to anyone who is at least 18 years old.

There are also some term deposits open to younger students, some even without an age limit. These term deposits are usually opened on the student’s behalf, by their parent or guardian.

A term deposit is generally a safe investment option, especially if you want to make sure you can’t touch your savings for a set period of time. If you are 18 or older, shop around for a competitive interest rate before committing. If you are under 18, speak to your parent or guardian to get started.

What is a short term deposit?

Sometimes you only want to tie up your money for a short period, maybe because you want to make a quick return on a large sum, or just to have more flexibility and access to your money. That’s where a short term deposit can come in.

Short term deposits are usually less than 12 months (e.g. 30 days, 90 days, six months or 12 months), though you will still not be able to access your money for the length of the term without incurring a penalty fee.

At the end of the term, you can roll your deposit over, or you can withdraw it. An advantage of short term deposits is that you can take advantage of higher interest rates with a different financial institution, if they are available.