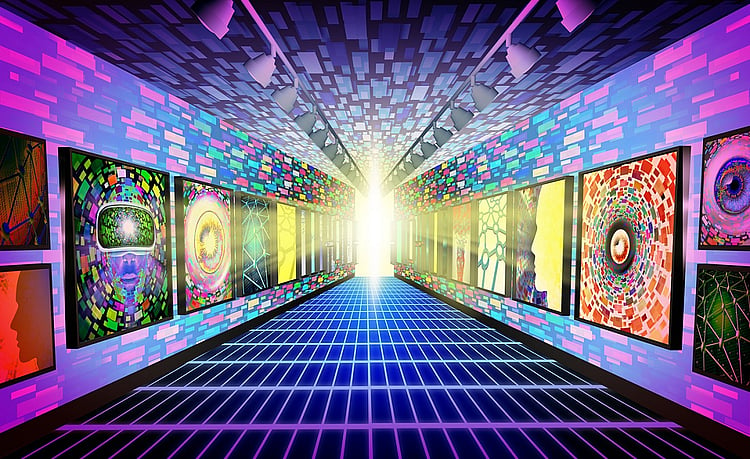 Cryptoart is any unique, digital creation authenticated on a distributed ledger. For most, this definition isn’t sufficient in explaining the origins of this art form and how its value is determined.

As the 21st century marches on, new generations are placing greater value on digitised products and economies, including artwork. Social networks and cryptocurrencies are booming, making it simpler and more attractive than ever to transact online.

The definition of what is considered art is constantly evolving and cryptoart is at the forefront of the latest wave, challenging the perceptions of novelty, value and authenticity.

It’s difficult to establish exactly when the first piece of cryptoart was created but the consensus seems to be that Mike Caldwell’s Casascius Coins were some of the earliest examples. These physical metal coins were minted in 2011 and each contains a private key on an embedded slip of paper which holds digital Bitcoin value. Once redeemed on the blockchain the cryptocurrency value associated with the physical coin is transferred to that user’s account.

Artist Rhea Myers created the Is Art project in 2014, employing an Ethereum smart contract that allows a user to toggle a JavaScript client between “This contract is art” and “This contract is not art”. It exploits the concepts of dematerialisation (art that is not presented in a fixed physical form) and nomination (something that is art because someone or something says it is) and combines them with the idea of interactive art that exists in or interferes with network protocols.

The Rare Pepe crypto project was created by global artists between 2016 and 2018, based on the "Pepe the Frog" internet meme, and traded as NFTs on the CounterParty blockchain. In October 2021, a Rare Pepe - PEPENOPOULOS - sold at a Sotheby's auction for US$3.6 million.

The popularity of cryptoart exploded in 2020 when artist Beeple sold a collection of illustrations and animations entitled Everydays: the First 5,000 Days. The sale made him the third most valuable living artist in history, netting him a whopping US$69.3 million at the time of purchase.

The value of these artworks is tied to non-fungible tokens (NFTs), verified and secured by distributed ledger technology (the blockchain). Given the digital nature of these pieces replication is simple. However, as with physical art, there can only be one original composition.

NFTs authenticate cryptoart, providing an immutable digital footprint of ownership. To better comprehend what this means, think of NFTs as unique identifiers tethered to individual works of art. When cryptoart is bought, sold or gifted an NFT transaction is recorded and validated across the entire blockchain network.

This method of certification is perhaps more definitive than practices used to verify physical artwork, such as paintings and sculptures. In these instances historians and experts establish legitimacy by analysing tangible elements of the art. As time goes on the means of confirming authenticity naturally diminish.

Conversely, blockchains are designed to be decentralised, perpetual registers that exist on peer-to-peer networks.

Cryptoart is also attractive as an investment opportunity because you can divide ownership rights among a number of people. Essentially, shares in the value of the artwork can be split among a network of individuals. These token shares can be traded on the blockchain.

There's also an element of artistic evolution that can be instilled within cryptoart, such as seamlessly selling entire collections - including those that may be unfinished at the point of sale but completed over time. Digitisation allows cryptoartists the ability to retain a presence in their work, potential adding futher value and innovation. Think of it as being similar to when Kanye West makes updates and alterations to his digital albums.

After its official streaming debut, West made changes to his 2016 album The Life of Pablo. The updated versions, including alternate mixes and instrumental adjustments, were made available on streaming services and for digital purchase on the musician's website. Changes like these are far less feasible when considering tangible pieces.

Easily the most problematic issue threatening the longevity of this innovative artform are its environmental implications. Validating transactions on the blockchain is known as crypto mining.

There’s a few different approaches that are attempting to change the way transactions are validated in an attempt to be less damaging ecologically. Instead of a proof-of-work concept that drives competition between miners to solve the cryptographic algorithms, a proof-of-stake mechanism randomly selects validators to verify trades. This process substantially reduces the quantity of wasted electricity resources.

Other solutions include trading carbon credits - although these are validated on the blockchain -  and real-world environmental acts such as planting trees and waste management initiatives.

If you're interested in investing or simply trying to understand how it works check out our handy guide to cryptocurrency.

Peter Terlato is a content writer with more than a decade of journalism experience. His work has appeared in a number of global publications including finder, Business Insider, Lifehacker and ETB Travel News. He's written extensively about finance, politics, technology, travel and lifestyle. At RateCity Peter publishes news and guides across an array of topics, from credit cards and the cash rate to car loans and cryptocurrency.