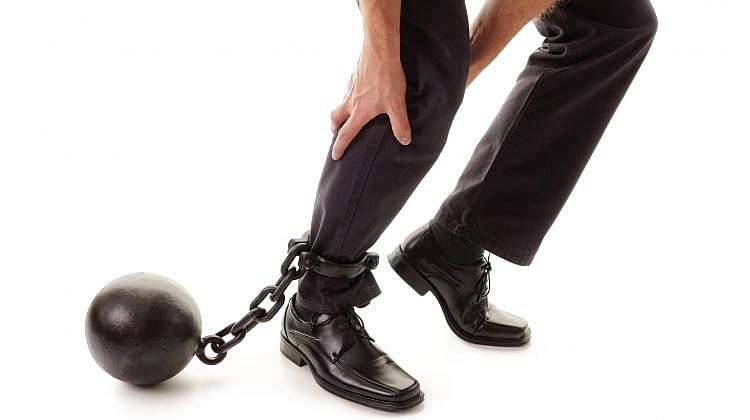 Would you buy a $1 coin off somebody for $1.20? The idea sounds ludicrous, but people who are in debt traps do something similar all the time.

Sometimes, people take out loans to invest. Other times, it might be because they want to buy ‘stuff’ or because they have no other way to pay a sudden bill.

Whatever the reason, anyone who takes out a loan is effectively buying money. Unless you can use that loan to make more money than you get charged in interest, it will worsen your financial position.

That’s something to remember as we outline five bad habits that keep people trapped in debt.

Bad habit #1: Not paying off your credit card in full each month

One of the easiest ways to get into a debt trap is to pay credit card interest. That’s because the interest rates are often above 15 per cent and sometimes above 20 per cent.

If you don’t pay your entire credit card bill each month, you’ll be hit with interest the next month. And if you then fail to repay all the accumulated principal and interest, you’ll be charged interest on your interest. Once that happens, it becomes increasingly hard to recover.

You’ll never have to pay a cent of credit card interest if you pay your entire bill each month. Unfortunately, some people mistakenly believe that all they need to do to avoid interest is to make the minimum monthly repayment (which is often about 2 per cent).

If you punch some numbers into the online MoneySmart credit card calculator, you’ll see how costly this mistake can be. If your credit card charges 18 per cent interest and you rack up $2,000 of debt and make just the minimum monthly repayments, it will take you 18 years and eight months to wipe away the debt, during which you’ll have to repay a total of $5,691. Effectively, you’d be buying $2,000 off your credit card company for $5,691.

Bad habit #2: Not having a rainy-day fund

Imagine you were hit with a large and unexpected bill – perhaps for a hospital visit or emergency home repairs. Would you be able to pay it from your savings?

If so, you’ll be fine. But if you’re forced to use a credit card or personal loan, you’ll be making the mistake mentioned above – ‘buying’ money for more than it’s worth.

Borrowing to invest can be a great way to build wealth – but as a general rule, taking out loans to buy ‘stuff’ is a bad financial move.

Bad habit #4: Keeping up with the Joneses

Unless you earn a large salary, keeping up with the Joneses might force you to live paycheque to paycheque.

Bad habit #5: Increasing your spending as your income increases

If you’re living paycheque to paycheque, it can be easy to think your money problems would be solved if you could just get a raise or find a better-paying job.

Unfortunately, though, it can also be easy to think you’re entitled to improve your standard of living as a reward for getting that raise or better-paying job.

If your income goes up by five per cent but your spending goes up by six per cent, getting a higher salary will actually help make your financial position worse.